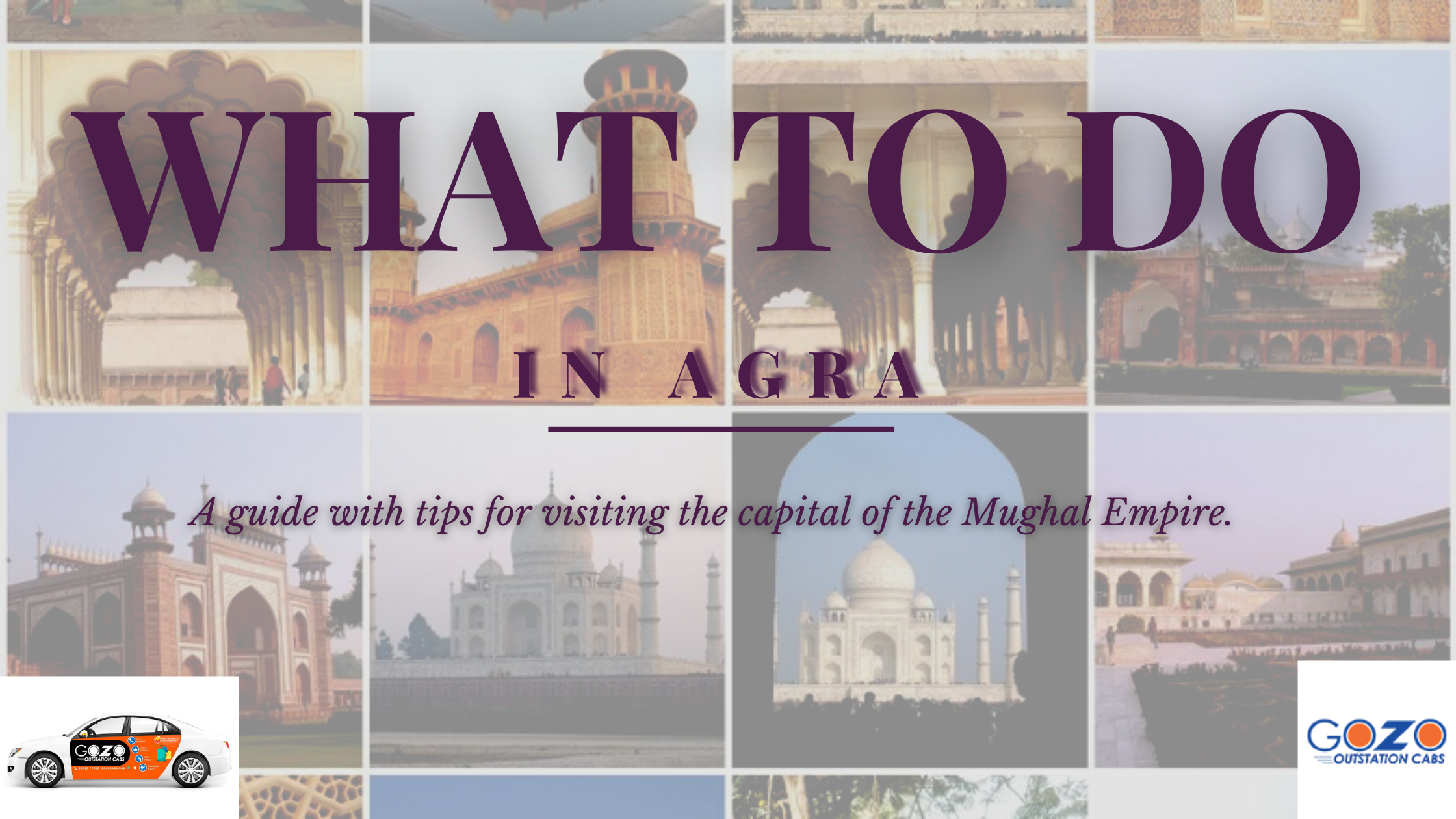 Home to one of the world’s seven wonders, the Taj Mahal, Agra is a city full of magnificent Mughal architecture. With the diverse tourist places in Agra, the city never ceases to be interesting and places like Wildlife SOS and Taj Nature Walk make this city all the more unique. Read on to know about these and a lot many places that you can visit in the magnificent city of Agra. Here in this article we are going to add 8 best places you can visit in a Short Agra Trip.

Lets start with the list of the top 8 tourist attraction places in Agra :


Taj Mahal or the “icon of love” is one of the best places to visit in Agra and the most popular tourist destinations in India. Located on the southern bank of the Yamuna River, this masterpiece rises like a dream from the hazy, and often times chaotic city of Agra.

The “Icon of Love” is also considered to be the epitome of Mughal Architecture.  If you want to step back in history and take a peek inside what that era looked like, go for a stroll inside the complex. From the magnificent Mughal architecture to cuisines sold outside the complex, everything has been inspired by the memorable era of the Mughals. It is always recommended to visit this beautiful mausoleum early in the morning; the view of the sunrise is worth every effort.

By the time you soak in the beauty of Taj and spend some time, pondering over life, in theMughal Gardens, it will be afternoon. Replenish yourself with some local delicacy and get ready for an insightful tour of the Taj Museum and Gallery.

Located on the west side of the gardens, the Taj museum is the place where you can find the authentic Mughal miniature paintings including, the original ivory portraits of emperor Shah Jahan and his wife Mumtaz Mahal. Apart from these paintings, take a tour of the museum and you will find gold and silver coins dating back to the Mughal era. {Fun Fact: Do take a look at the nifty celadon plates. These were said to have split in pieces or even change colour if the food served in them was poisonous. Such a cool thing, right?}

Located at a distance of 40km from Agra, Fatehpur Sikri is a town in the Agra district and a famous tourist attraction. A city predominantly made of red sandstone, Fatehpur Sikri was founded in 1571 century by Mughal Emperor Akbar. It is essentially a fortified city built by the king and had been the capital of his Empire for fifteen years. Now a UNESCO world heritage site, it is home to Jodha Bai’s Palace, Jama Mosque, Buland Darwaza, and Tomb of Salim Chisti among many other famous monuments.

Conceived long before Taj Mahal came into the picture, the powerful emperor Babur built the Charbagh or more prominently called Mehtab Bagh. Located north of the Taj complex, this must-visit attraction in Agra is full of greenery and provides a perfect spot to view the Taj Mahal.

Also called the ‘Moonlight Garden’, this is just the place to get a stunning view of the sunset and capture some Insta-worthy captures. Visitors often come to Mehtab Bagh to find respite from the usual touristy crowd of the city. The garden gives them that solitude and much more.

An architectural masterpiece, The Red Fort of Agra or popularly known as Agra Fort was built by Emperor Akbar in 1573. Located on the right bank of the River Yamuna, it is made entirely of red sandstone. One of the UNESCO World Heritage Sites, it lies 2.5 kilometers from the Taj Mahal.

Within the premises of Agra Fort lie the most exquisite structures like the Pearl Mosque, Diwan-i I Khas, Diwan-i I Aam, Moti Masjid and Jahangiri Mahal. View of Yamuna River and Taj Mahal from the fort’s pavilions is mind-stirring.

Often referred to as the “Baby Taj Mahal”, the tomb of Itimad-ud-daulah is a Mughal mausoleum and often regarded as a copy of the Taj Mahal. This is the first tomb in India made entirely of marble. The tomb was commissioned by Nur Jahan, the wife of Jahangir, for her father Mir Gheyas Beg (later known as Itimad-ud-daulah), who was a minister in the court of Shah Jahan.

The tomb marks the transition from the first phase of Mughal architecture to the second. This was the first structure to be built on the banks of the Yamuna River. It basically consists of Indo-Islamic architecture, with the use of arched entrances and octagonal shaped towers. If you take a bird’s eye of Itimad-ud-daulah Tomb, it looks like a jewel box set in a garden. This magnificent mausoleum was built to inspire the construction of one of the wonders of the world “Taj Mahal” in the later years.

Akbar’s Tomb is situated in Sikandra, the outskirts of Agra and spreads over an area of 119 acres. Considered an important architectural masterpiece of the Mughal era, it was built between 1605 and 1618. Made entirely out of sandstone and white marble, Emperor Akbar himself oversaw the construction of this tomb until his death. Unlike the other tombs of famous Muslim kings around the world, the Tomb of Akbar faces the rising sun instead of Masjid of Mecca.

The main tomb is surrounded by a beautiful garden that was designed by Akbar himself. His wife’s (Mariam-uz-Zamani Begam) tomb is also located in Sikandra about a kilometer away from Akbar’s Tomb. Following Tartary traditions, that state that one must see-through the construction of one’s tomb themselves, Akbar lived through the construction of his tomb and built a beautiful garden around it.

Also known as ‘Friday Mosque’, Jama Masjid at Agra is a seventeenth-century structure and is one of the largest mosques built by the Mughals in India. Constructed under the reign of Shah Jahan in 1648, Jama Masjid is dedicated to his favorite daughter Jahan Ara Begum. This splendid monument is visible from the Agra Fort with the Agra Fort Railway station right between the two structures.

The Jama Masjid is built mainly of red sandstone and white marble that stand as a testimony to the magnificent Mughal architecture. It has a fountain at the center and is supported by four kiosks in the courtyard. The interior walls have scriptures in the Persian style praising Shah Jahan and Jahan Ara. The inlaid panels of work here are quite similar to that of the Taj Mahal and are common to all the monuments and structures built by the Mughals in Agra. Every Friday, special prayers are conducted at this mosque which is attended by thousands of devotees. The Tomb of Salim Chisti is a part of the mosque compound.

Well, this is a short description of the 8 best tourist attraction places in Agra that you can’t afford to miss for a short trip to agra.  It will take almost 2-3 days to complete all these beautiful places in Agra. Well booking a local Cab in Agra can be your mate in hassle free traveling and local sightseeing.

If you are in Noida then this could be your weekend gateway travel plan. Just book Noida to Agra cab with Gozocabs starting from @1680 for a one way ride.

From Delhi you can also book Delhi to Agra cab with Gozocabs starting from @1360 .

Well visiting by car to Agra is a great experience and if you book cabs from Gozocabs then there will always a chauffeur driven car available at your disposal at affordable pricing. Gozocabs offers reliable cab service all over India. Visit the website for Booking or getting any kind of assistant just call at (+91) 90518-77-000.

Top 10 places to eat in Amritsar? 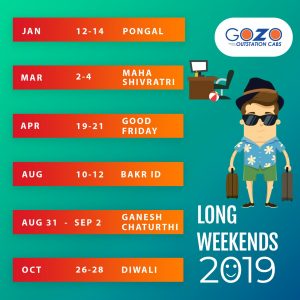